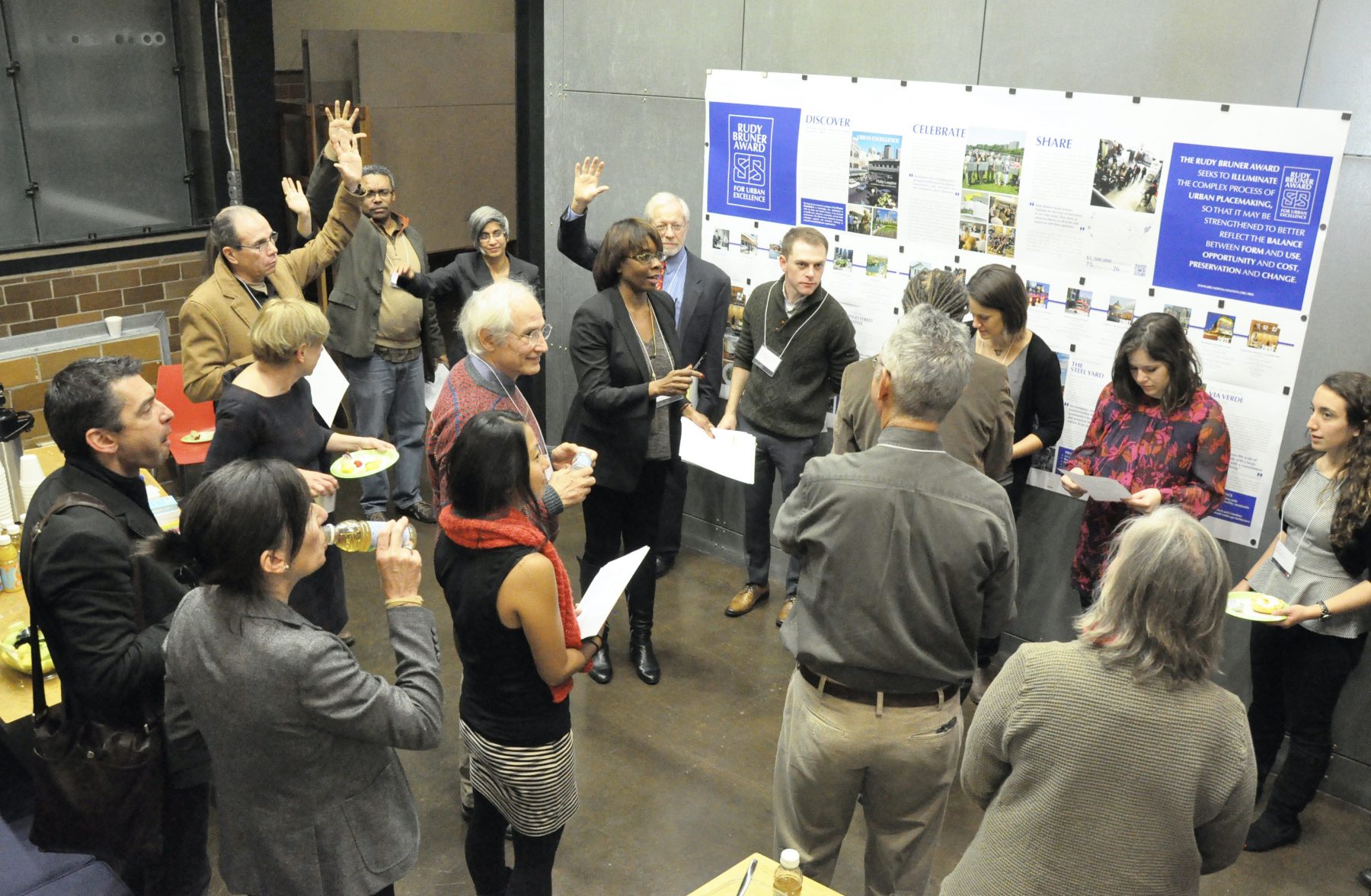 The Rudy Bruner Award for Urban Excellence (RBA) was founded by architect Simeon Bruner as part of the Bruner Foundation. The RBA is named in honor of his father, Rudy Bruner, who established the foundation with his wife Martha in 1963 and had a life-long interest in architecture and cities and published books by Frank Lloyd Wright under Horizon Press.

The premise for the RBA emerged at a gathering hosted by the Bruner Foundation in 1985 in New York City. Simeon Bruner invited a group of researchers attending the Environmental Design Research Association (EDRA) annual conference to dinner to solicit ideas for ways to increase understanding about the role of architecture in the urban environment. As an architect and developer, he was frustrated about the focus of architectural awards and publications on buildings as objects, rather than in-depth evaluation and discussion about what it takes to make great places. The meeting concluded with the idea for a new award that celebrated the process of placemaking and an invitation from the Bruner Foundation to submit proposals for the creation of a new program.

The award program was designed by architects Robert G. Shibley and Polly Welch. The distinctive, in-depth selection process was informed by their research of existing national and international design award programs. The comprehensive application and rigorous evaluation methodology are intended to consider not only the product or place but also the processes and values that shape it.

The inaugural RBA design competition was held in 1987 attracting 81 submissions. Five places were selected with the top award going to Pike Place Market in Seattle. Findings from the proceedings were published in the book Urban Excellence in 1990, which offers insight into the award premise, goals, and selection process, along with in-depth case studies about the five winners, and lessons learned.

Since 1987 the RBA has recognized and documented 88 places over 17 biennial award cycles. Each award cycle is documented with a book that is published online and in print form. Copies of entry submissions are housed at the Rudy Bruner Award Digital Archive at the University at Buffalo School of Architecture and Planning.

In addition to the detailed case studies, lessons learned essays, and books published in conjunction with award cycles, an extensive collection of writing has been produced by and about the RBA. These publications share insights gleaned from accumulated research and ongoing investigation and discussion about urban excellence.

The RBA published Sustaining Urban Excellence: Learning from the Rudy Bruner Award for Urban Excellence 1987-1993 in 1998 with support from the United States Department of Housing and Urban Development and authored the chapter Making and Sustaining Excellent Urban Places in Timesaver Standards for Urban Design published by McGraw Hill in 2003. RBA papers include Creating Excellent Urban Place: Learning from the Rudy Bruner Award, presented at the 54th International Making Cities Livable Conference in Santa Fe in 2017 and Returning to the River: Reclaiming American Waterfronts for the Public Realm, presented at the Fragile City: Creation, Expansion, Collapse and Resilience hosted by NYU and Università Ca’ Foscari in Venice in 2018. Since 2013 the RBA has been a regular contributor to METROPOLIS Magazine.

The RBA was featured in one of four stories discussed in the book Placemaking: The Art and Practice of Building Communities by Lynda H. Schneekloth and Robert G. Shibley (published by John Wiley & Sons, Inc. in 1995) and highlighted in numerous journals in Architecture Magazine, Architectural Record, Design Book Review, Designer-Builder, Foundation News and Commentary, Metropolis, New Village, and Urban Land.

The RBA’s commitment to ongoing learning and exchange is realized through extensive public programming. In addition to sponsoring the biennial design award presentations, the RBA produces in-person and virtual events, often in partnership with local and national organizations, that bring together people to learn about, exchange ideas and resources, and develop solutions to pressing urban issues. These include events produced in conjunction with award presentations as well as forums and symposia organized around special topics.

Between 2002 and 2014 the RBA partnered with the Harvard Loeb Fellowship to host 18 Bruner Loeb Forums in 14 cities that explored role of arts and cultural organizations in building communities, Legacy City design, and equity. In 2020 RBA produced online events in collaboration with the Association of American Schools of Architecture, Chicago Architecture Center, and Enterprise Community Partners. In 2021 the RBA partnered with Northeastern University to curate and produce Inspiring Design: Creating Beautiful, Just, and Resilient Places in America, a 14-session webinar.

Between 2002 and 2014 the RBA partnered with the Harvard Loeb Fellowship to host 18 Bruner Loeb Forums in 14 cities that explored role of arts and cultural organizations in building communities, Legacy City design, and equity. In 2020 RBA produced online events in collaboration with the Association of American Schools of Architecture, Chicago Architecture Center, and Enterprise Community Partners. In 2021 the RBA partnered with Northeastern University to curate and produce Inspiring Design: Creating Beautiful, Just, and Resilient Places in America, a 14-session webinar.

The biennial award was put on hold indefinitely in 2020. In Fall 2022 the RBA will transition to the University at Buffalo School of Architecture and Planning, the culmination of a decades-long partnership with the school and Dean Robert Shibley. It will begin a new chapter as a resource and tool for research, scholarship, and practice. Stay tuned for more details to come.