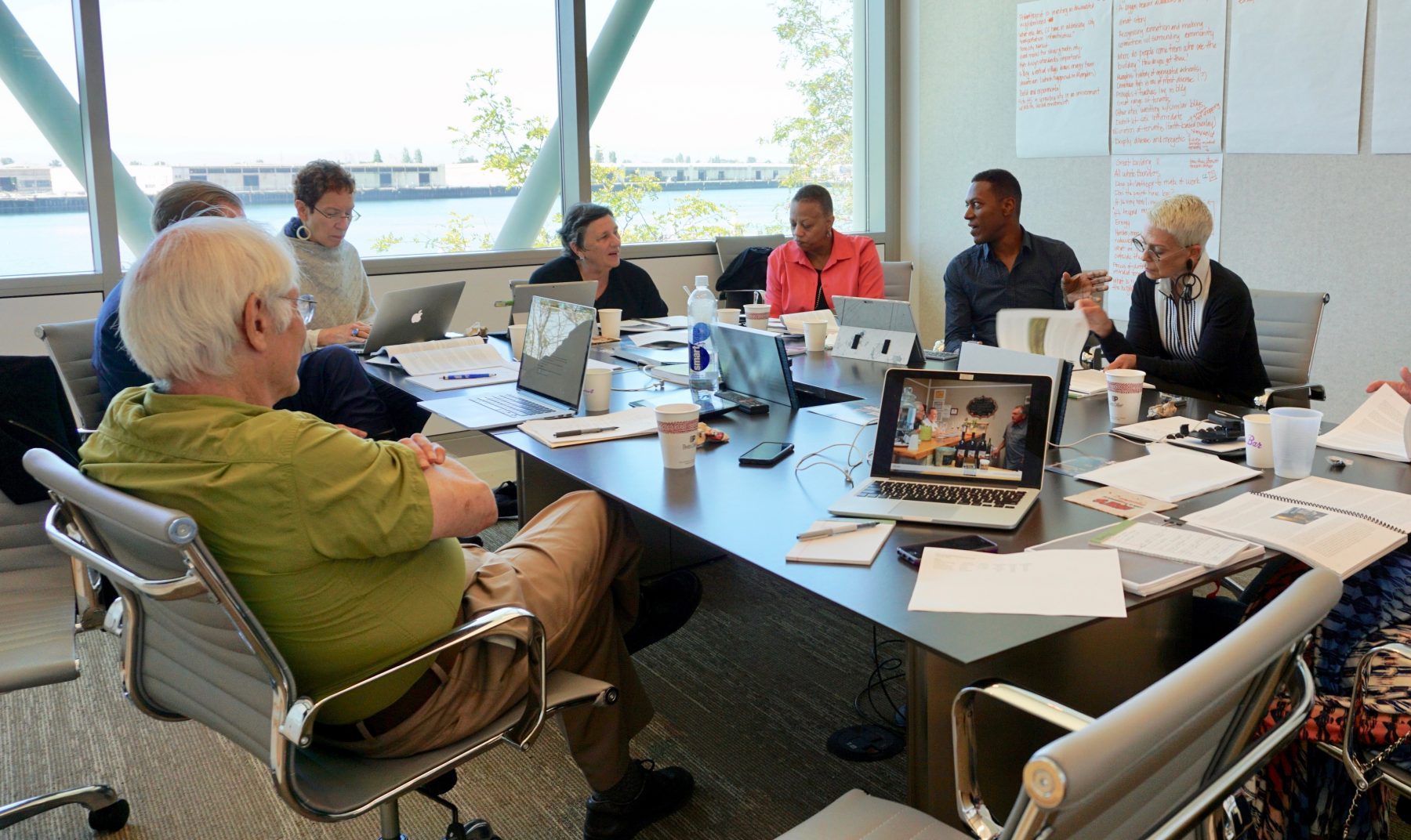 When the Rudy Bruner Award asked me to observe and write about its selection process, I knew it was a unique opportunity. A look at the Rudy Bruner Award’s legacy of winners over 35 years shows an unexpected–even idiosyncratic–list that doesn’t resemble winners of a conventional design competition. There are large public parks, grand transportation-related developments, and mixed use complexes, sure–but there are also disaster recovery projects, artist-driven developments, and manufacturing centers. That’s because the RBA is a design award that celebrates the full complexity of urban excellence. I wanted to learn how the awardees came to represent such variety, and about the values that bind them. What I learned was both simpler and ultimately more profound than I expected.

From the outset it was clear that a high degree of thoughtful rigor pervades all aspects of the award. It begins with composing the selection committee, then a multi-step process unfolds over several months, culminating in award celebrations and the publication of case studies of the winners.

There is a new multidisciplinary selection committee for each cycle, including a sitting mayor. Assembling it is an art honed by the Bruner Foundation team. The 2019 members included Mayor Libby Schaaf of Oakland, as well as Marc Norman, Carol Coletta, Brenda Breaux, Adrian Benepe, and Carol Ross Barney, representing a balance of gender, age, culture, and geography. Several had been involved with past winning projects. They brought experience with a wide range of cities and development projects and the tradeoffs that make them work, and yet they retained their curiosity about urban dynamics.

Selection committee members are not dogmatic, they thrive on complexity, and they're willing to be challenged.

They brought experience with a wide range of cities and development projects and the tradeoffs that make them work, and yet they retained their curiosity about urban dynamics. They had clear perspectives but they weren’t dogmatic, and were willing to be challenged.

As is customary, the 2019 committee began its work with only 3 constraints: a contender has to be a real place, it has to be urban, and it has to have been in existence long enough to assess its success. There is no fixed standard of urban excellence. The ambiguity is significant because conversation is at the heart of the Award. Even before the first meeting at the RBA office in Cambridge to select finalists, a dinner hosted by founder Simeon Bruner set the tone for the experience to follow: collaborative, engaged, substantive, respectful.

There is no fixed standard of urban excellence–conversation is at the heart of the Award.

The following day, pairs of reviewers spread out all over the RBA office to sift the intensive, detailed applications for the stories that stood out as deserving greater examination and arousing the most curiosity. Robert Shibley, one of the award’s designers and this year’s facilitator, encouraged the 2019 committee to find excellence in the project rather than laying a preconceived idea of excellence on it. As they culled, he also encouraged the group not to eliminate any application before they made their final decisions and to test their own principles and preferences repeatedly.

The wisdom of the projects and the people behind them is a bedrock principle of RBA. In the application, project leaders, partners, and community members define and evaluate their own success against their goals and commitments, challenges, and innovation. Each applicant provides a unique definition of urban excellence, and their stories were fundamental to persuading the entire committee, which discussed every single application before reaching consensus on the five finalists.

Phase 2, the site visits, constituted a critical element of research and due diligence. Armed with questions from the selection committee, the RBA visiting team tested each site’s story against the reality, in tours and conversations with project users, public officials, and community members. The team sought quantitative evidence of success and sustainability, but sometimes the answers were qualitative, found in the changing narratives of a place, the ways residents and the broader community experience it and engage with it. The intention of the inquiry was not to judge, but to better understand the sites and present them back to the selection committee at its second meeting in a way that informed determining the Gold medalist. Over the summer and fall, each medalist designed a local celebration that enabled recognition and reflection; each detailed case study will be published and available for public exploration.

“Changing the narrative” emerged as a theme among this year’s five finalists, where dissatisfaction with the existing conditions was a trigger that compelled people to act: redefining outmoded infrastructure, meeting the needs of people in new and unexpected ways, instilling pride. The changing narrative of urban excellence was one thing that motivated the Bruner Foundation to design an award that embodies an aspiration: to engage with the ever-evolving story about how places get made and how they work.

Dissatisfaction with an existing narrative is one of the things that compels people to act to make a change.

Cities around the country are struggling to meet the needs of their residents and the challenges of housing, climate resilience, employment, food security, health, education, and other imperatives of community life. The effort and ability of people to overcome obstacles to address dysfunction, crisis, or inequity in cities is what the RBA is interested in. There are few funders in the US that dig deeply enough into a place to understand how it lives. The RBA does so, not to quench curiosity or provide a roadmap, but to inspire deeper curiosity and an ongoing conversation.

Every two years, the award elevates new stories of creativity, examples of process and outcome that other urban areas, urban planning professionals, community groups, government officials, and the academic community can learn from. Since 1987 the RBA has celebrated 88 winners with 20 publications, dozens of conference presentations, and extensive media coverage; it has changed the narrative about design awards, design in cities, and ways of meeting urgent urban challenges.

Coming up: Look for Barbara’s next post in the series on the RBA’s selection process.