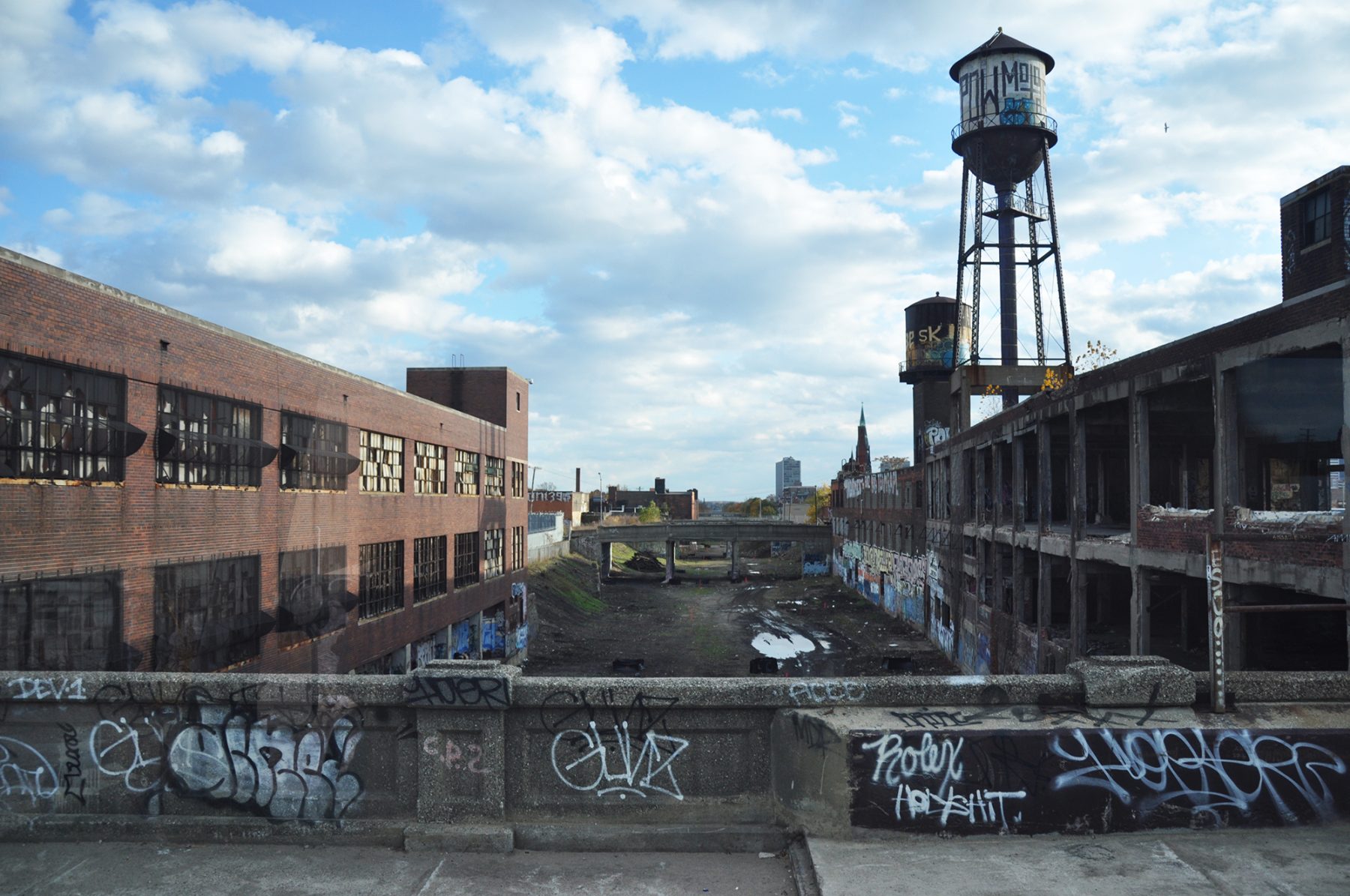 Last month, 108 participants—architects, landscape architects, planners, educators, nonprofit leaders, policy makers, and others interested or working in cities—gathered in Detroit for theBruner Loeb Forum. Our focus was Legacy City Design. The event was sponsored by the Bruner Foundation and the Loeb Fellowship at the Harvard Graduate School of Design—in partnership with the American Assembly, J. Max Bond Center for the Just City, and Detroit Collaborative Design Center. The day-and-a-half annual forum was the platform for a lively exchange of information and ideas about design and planning in America’s “Legacy Cities.”

The term “Legacy Cities” was coined in 2011 during an American Assembly meeting; it was also held in Detroit. That event attracted 80 US and European representatives to discuss the challenges facing older, mid-sized metropolitan areas struggling with post-industrial population loss. The participants, as described in the resulting report, Reinventing America’s Legacy Cities: Strategies for Cities Losing Population, employed “legacy” as a descriptor “that invokes thoughts of both extraordinary inheritances and obsolete relics…suitable…for a group of American cities that have rich histories and assets, and yet have struggled to stay relevant in an ever-changing global economy.” Having lived and worked in Pittsburgh, the term resonated with me, particularly in light of the Steel City’s remarkable transformation over the past 30 years.

This year’s Bruner Loeb Forum topic was our most expansive to date, involving multiple cities and partners. We took this approach because we believed that discussion of the subject was critical to the health and vitality of our cities and that making connections between policy, design, and community sectors was also crucial. Our planning team engaged leaders from community design centers working in several legacy cities to ensure the forum’s content remained as close to the ground as possible in terms of what was taking place in practice. We wanted attendees to see and experience relevant urban challenges first hand and to spend time with people involved in small- and large-scale planning and development strategies nationwide.

The forum opened with a series of mobile workshops that included stops in Brightmoor andEastern Market, where community members leading infrastructure and vacancy initiatives gave brief presentations and led discussions. During a stop at Eastern Market’s Trinosophes, a gallery and performance space, Dan Kinkaid, executive director of Detroit Future City, gave an overview of the compelling two-year project that “blended technical expertise with that of the community”—including more than 30,000 conversations and 163,000 interactions—to create a shared vision and framework to guide investments in Detroit’s future.

Feldman addressed the importance of “designing for and with people” in the process of rebuilding. Fullilove advocated for the connection of social systems with design, considering “placemaking” as the “creation of places to hold social capital.” She encouraged focusing on more than just the physical plan or “grid,” cautioning that shrinkage—both unplanned and planned—can cause “the dislocation and disruption of social milieu and the rupture of social systems” that affect the physical and emotional health of communities. Murphy concluded the evening by sharing a spirited narrative about Pittsburgh’s renaissance after hitting “rock bottom” 30 years ago, using it and the story of Horatio Nelson Jackson and America’s First Road Trip as reminders of the importance of collaboration, partnerships, and “taking some risk to see the future.”

Norman, Park, and Schwarz addressed opportunities and challenges associated with surplus systems such as road and sewer networks, decommissioning existing infrastructure, and the development of new green spaces. Cox, Reed, and Shibley discussed examples of collaborative, community-driven visions that illustrated the value of broad planning frameworks, allowing for strategic, phased investment, and incremental, organic development. Reed underscored the fact that the “landscape can be an active force in remaking the city,” and that “transitional landscapes” can play a critical role by bridging the phases between vacancy and permanent development as well as addressing environmental remediation. The case studies were reminders that the implementation of projects—including small-scale, spontaneous, pop-up ones—is critical to demonstrate what is possible and generate demand for good design.

Focusing on the forum’s key goal of discussing innovative work in legacy cities nationwide, participants identified nearly 200 projects and initiatives addressing infrastructure and vacancy in their urban areas (including 13 legacy cities) and generated a comparable number of new ideas.Toni Griffin, director of the J. Max Bond Center, and Dan Pitera, (2009 RBA selection committee) director of the Detroit Collaborative Design Center (which designed 2009 RBA Silver Medalist St. Joseph Rebuild Center), led a wrap-up discussion that summarized the forum’s themes and takeaways that affirmed the value of focusing on vision and possibilities, trust and risk taking, and partnerships and networks that foster information exchange and dialogue. As Fullilove noted the evening before, “the possibilities are endless,” particularly when “manifesting the ‘we’ to restore a city’s greatness.”

The strong interest in and enthusiasm for the forum’s topic bodes well for plans to create an ongoing information-sharing network. Findings from this year’s forum will be incorporated into the Legacy City Design website, including case studies, other forum resources, and participating organizations and presenters. For additional information, including dispatches from the event, check out posts from the American Assembly’s Legacy Cities Initiative, the Loeb Fellowship’sLoeBlog, NextCity, and John Gallagher’s Learning from Legacy Cities recap.

Looking ahead, the Bruner Foundation and Loeb Fellowship will announce the Request for Proposals for our 2014 forum soon. Check out the Bruner-Loeb Forum website to learn more.