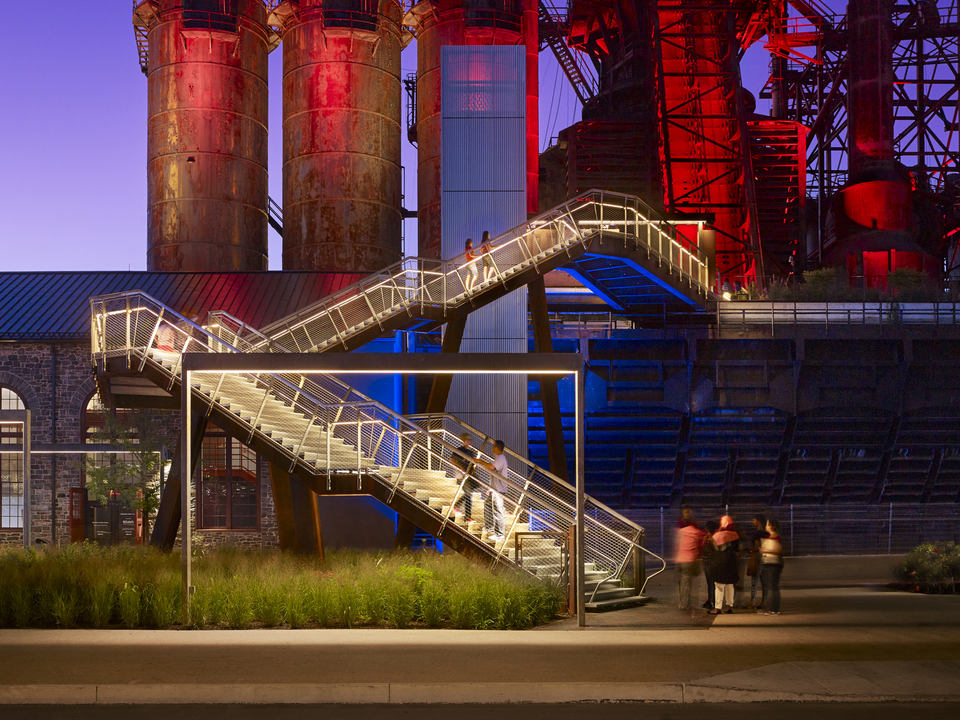 Once the site of an abandoned steel mill, the SteelStacks Arts and Cultural Campus is now a remarkable mixed-use district in Bethlehem, Pennsylvania.

After our trip to Iberville Offsite Rehabs in New Orleans, our team headed north to visit SteelStacks Arts and Cultural Campus, an abandoned steel mill-turned-mixed-use cultural and entertainment district in Bethlehem, Pennsylvania. The former mill’s iconic blast furnaces now anchor a civic commons that honors the city’s steelmaking legacy and symbolizes the rebirth of a region economically devastated by its closure.

The 9.5-acre SteelStacks campus occupies the southern portion of the sprawling Bethlehem Steel plant and corporate headquarters. Established in 1863 and stretching more than four miles along the Lehigh River, the 1800-acre mill dominated the community physically and economically, employing 31,000 people at its height and supplying steel for the Chrysler Building, the Golden Gate Bridge, and World War II battleships. 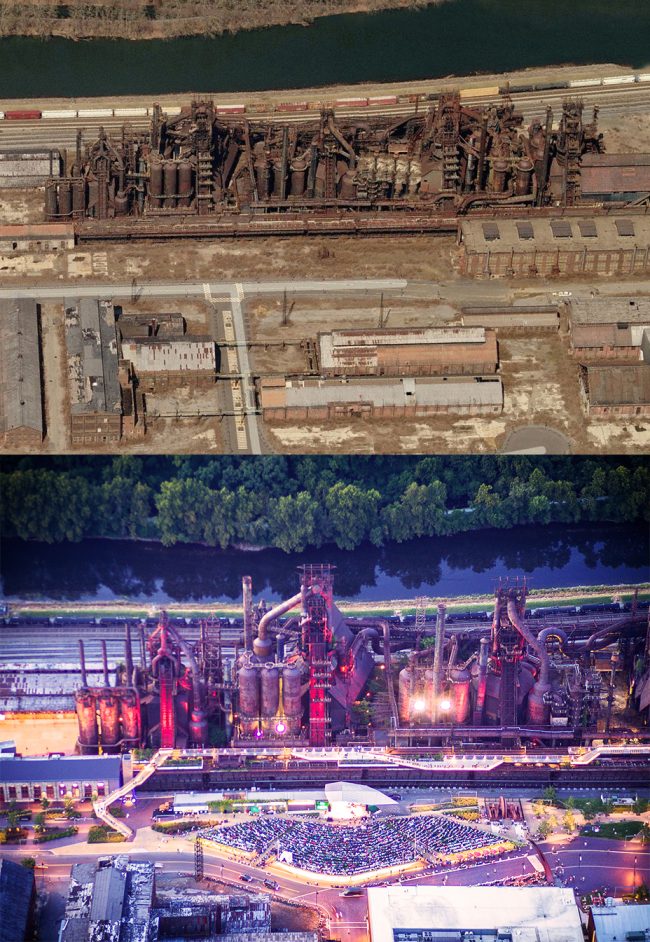 The historic blast furnaces have been integrated into a new cultural campus and gathering place that hosts 1.5 million visitors annually for a variety of events.

Before image courtesy Redevelopment Authority of the City of Bethlehem; After – Christenson Photography for WRT

After steelmaking operations ceased in 1995, Bethlehem Steel Corporation initiated brownfield remediation and planning for redevelopment of the site. The master plan, created in partnership with the community, proposed an industrial park on 1,600 acres and a mixed-use district including housing, museums, and retail on the remaining portion, which contained the majority of the mill’s historic structures.

The idea for an arts and entertainment district was inspired by civic leaders’ visits to repurposed industrial sites in Germany’s Ruhr Valley. The resulting campus plan, designed by WRT of Philadelphia and developed by a consortium led by the Redevelopment Authority of the City of Bethlehem, was envisioned as a “21st century town square.” Organized around a public plaza anchored by the blast furnaces and the Levitt Pavilion outdoor amphitheater, it includes the Bethlehem Visitors Center, ArtsQuest Center, PBS39 public broadcasting center, and Hoover-Mason Trestle Park. 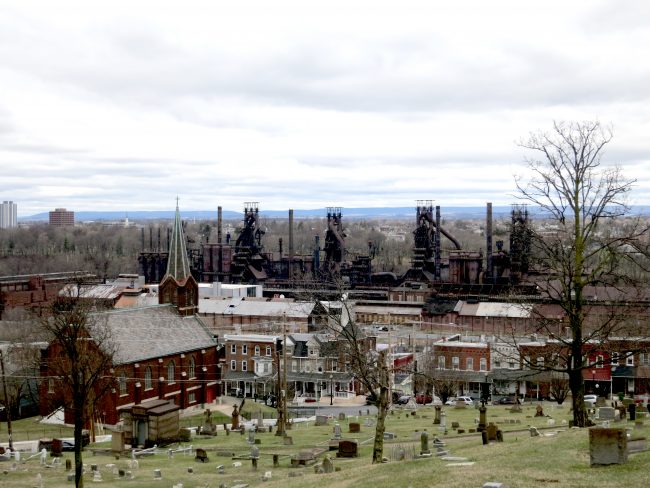 The former Bethlehem Steel mill and blast furnaces have been a dominant presence in the city and South Side community for more than a century.

The visitors’ center, located in the 1863 Stock House, provides an orientation to the history of steelmaking in the Lehigh Valley. Just outside the center, steps lead up to the 46-foot-high Hoover Mason Trestle. Constructed in 1907 and reopened as an elevated pedestrian walkway in 2015, it offers close-up views of the blast furnaces and panoramic views of surrounding structures and the South Side neighborhood. Interpretive signage and an award-winning, interactive website that offers a virtual visit and links to additional information and videos provide insight into the site’s history and heritage. The new ArtsQuest Center and PBS39 Building offer broadcasting, education, event, and performance venues.

Funding for the 9.5-acre, $120 million development came from a variety of public and private sources, including a 20-year Tax Increment Financing District and the Sands Casino Resort Bethlehem, located on the northern part of the site.

Once accessible only to plant employees, the site is now a local and regional destination. SteelStacks hosts 1.5 million visitors annually, offering events like free outdoor concerts and ArtQuest’s annual MusikFest. The campus is sparking nearby investment as well, including the new Lehigh Valley Charter High School for the Arts and the National Museum of Industrial History. Kassie Hillgert, ArtQuest president and CEO observed: “The bottom line is that with Bethlehem’s major industry closing 20 years ago, this is a city that could have gone in an entirely different direction; however, thanks to incredible leadership and vision, it continues to reinvent itself, and the city’s future is incredibly bright.”

Stay tuned for posts about our upcoming visits to the Bruce C. Bolling Building in Boston and the Chicago Riverwalk. 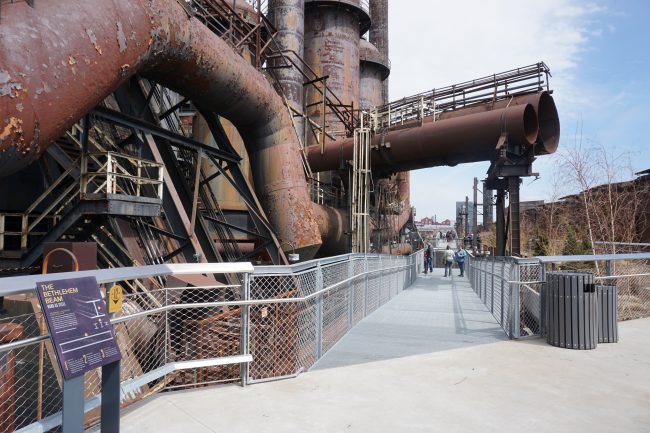 The elevated Hoover-Mason Trestle provides a close-up view of the blast furnaces along with interpretive signage developed with input from former steelworkers. 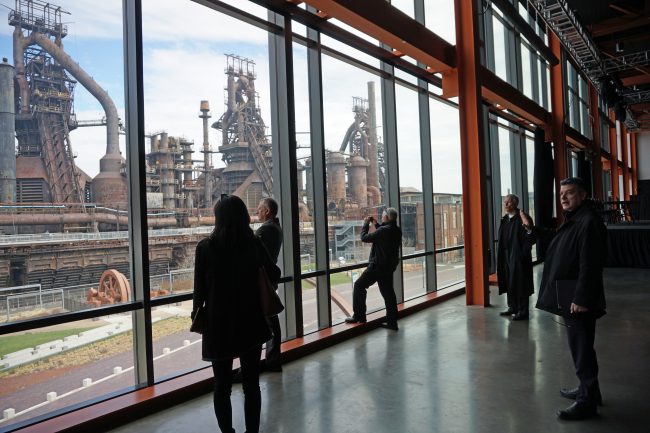 Event and performance spaces in the ArtsQuest Center overlook the plaza and offer dramatic views of the blast furnaces. 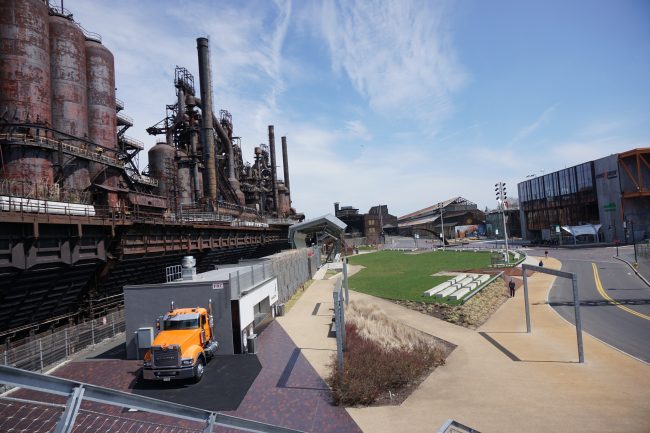 The campus is organized around a public plaza anchored by the blast furnaces, Levitt Pavilion outdoor amphitheater, ArtsQuest Center, and PBS39.