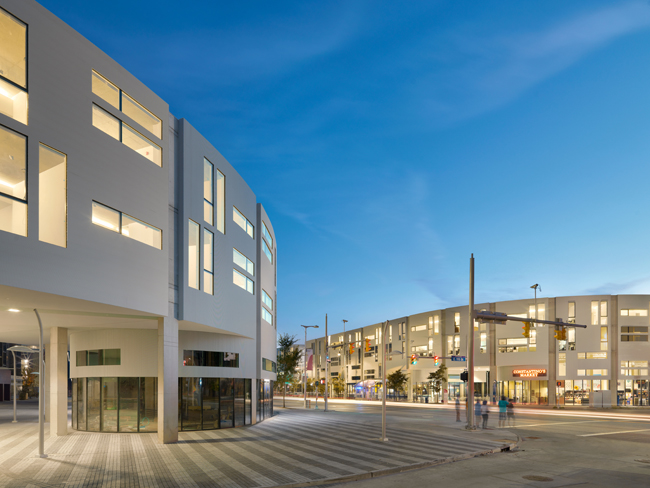 After visiting Grand Rapids Downtown Market in Michigan, the Bruner Foundation team headed to Cleveland to visit another of the five 2015 Rudy Bruner Award for Urban Excellence finalists.

Located at a convergence of neighborhoods three miles south of downtown Cleveland, Uptown District is the redevelopment of a corridor that links surrounding neighborhoods with art, educational, and healthcare institutions, producing outdoor gathering spaces, retail shops and restaurants, student and market-rate housing, and public transit connections in the process. This new development has transformed two city blocks of Euclid Avenue between two of the city’s leading cultural institutions that were a no man’s land of vacant and underused properties into a community gateway and destination.

The Museum of Contemporary Art Cleveland designed by Farshid Moussavi anchors Toby’s Plaza, a large public space at the corner of Euclid Avenue and Mayfield Road designed by Field Operations. The plaza is enlivened with public art installations such as Faces of Uptown and The Great Picnic as well as programming and events that draw people to the district and reinforce its emerging identity as the community’s “living room.”

Envisioned as an arts and entertainment area, a key goal of the project was to create “connective tissue” that linked its cultural institutions with downtown Cleveland and adjoining communities. A design charrette and plan completed by Chan Krieger Associates (now NBBJ) informed the massing and design principles of the development, which includes mid-block passageways and an internal “boulevard” that provide visual and pedestrian connections between Euclid Avenue and adjoining buildings, plazas, and parking.

Uptown District is an outcome of the Cleveland Foundation’s Greater University Circle Initiative, a public private partnership between leading anchor institutions, philanthropies, financial institutions, community groups, and the City of Cleveland that seeks to leverage institutional resources to improve a four-square mile area housing key cultural institutions such as the Cleveland Museum of Art, Case Western Reserve University, and University Hospitals and connect it with surrounding neighborhoods.

The more than $150 million project was constructed in two phases, the last of which was completed in 2014. Financing was provided by the Cleveland Foundation, New Market Tax Credits, and the City of Cleveland. Transportation to the development was enhanced by investments in two new Cleveland Regional Transit Authority rail stations at the edges of the district and the popular HealthLine bus-rapid transit system on Euclid Avenue that connects Uptown with downtown and East Cleveland

Uptown District highlights the role of anchor institutions in catalyzing and leading community change. The development has drawn national attention for its design and institution-led approach, including articles in Architectural Record and the New York Times. Locally, the project has affirmed the value of multidisciplinary collaboration and partnerships, and the importance of taking risks to invest in a long-term vision with broad community benefits. “It was a ‘no man’s land’ for 40 years,” explains John Wheeler, Senior Vice President for Administration at Case Western Reserve,He adds that uptown “rose out of necessity…we couldn’t tolerate what was there any longer.” People in the area refer to Uptown’s “rock and ripple effect” as activity in the district leads to additional interest and development and increased pride in their city, Cleveland.

Next, we head to Greenville, South Carolina for our final site visit to Falls Park on the Reedy, the renaissance of a 26-acre river corridor running through the heart of Greenville.

The City of Boston launches Imagine Boston 2030, a planning vision for the city’s future.