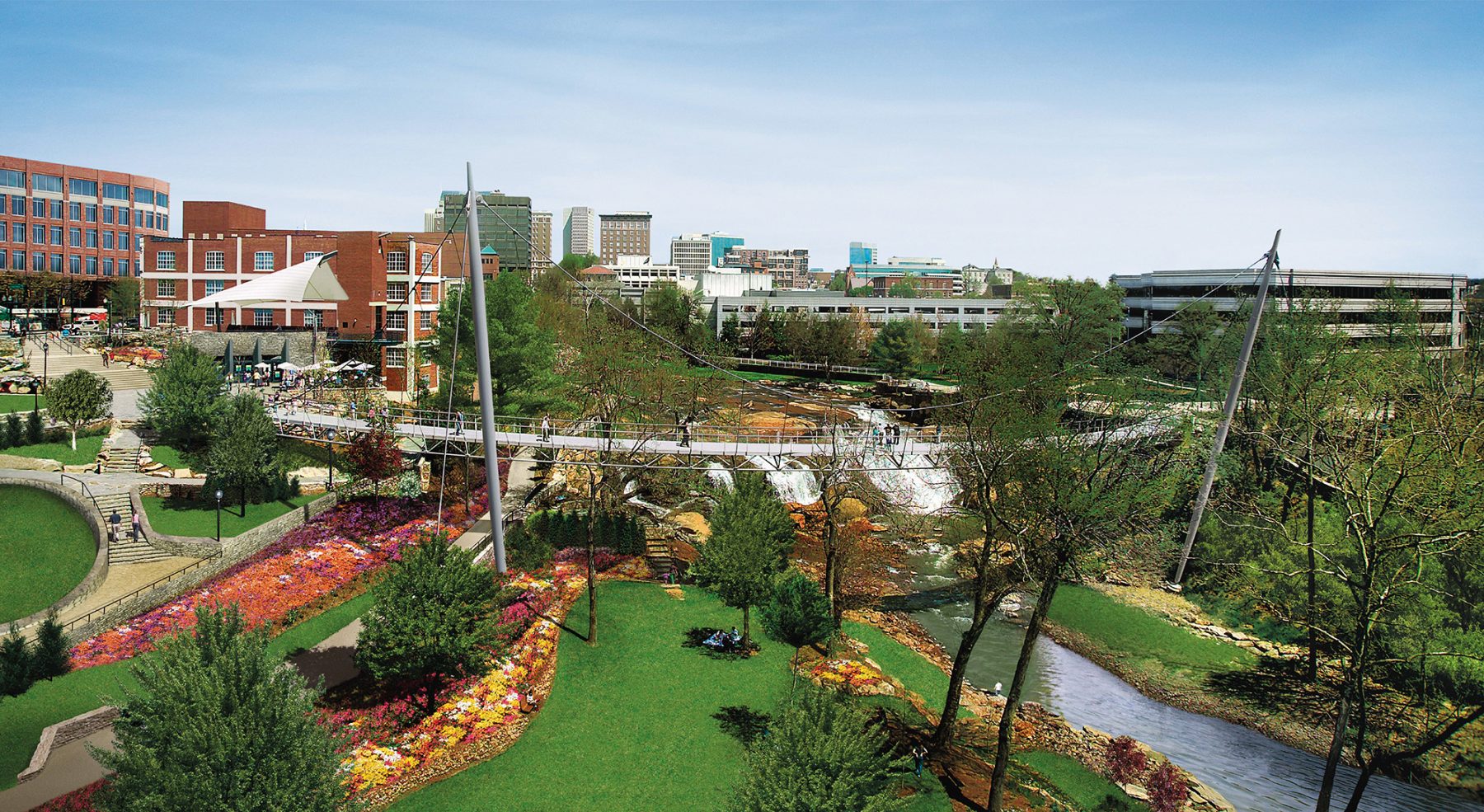 The Rudy Bruner Award for Urban Excellence was created to catalyze conversation about the impact of design on the urban environment and its contributions to the economic and social vitality of cities. The RBA Silver Medalist events honoring Uptown District in Cleveland and Falls Park in Greenville, South Carolina did just that, amplifying the impact of the award with public programs that provided opportunity for lively conversation and reflection on the projects and their respective city’s past, present, and future.

I kicked off the Uptown District celebration on October 8th at the Blue Block Party, an annual street festival hosted by Uptown District and Case Western Reserve University in connection with the university’s homecoming weekend. That evening, Toby’s Plaza was transformed with live music and creative lighting displays and crowded with students and alumni, residents, and workers enjoying the entertainment, food and drinks, and unusually warm weather.

The next day, at the Museum of Contemporary Art (MOCA), the momentum continued with the presentation of the award and a panel discussion organized by Case Western and moderated bySteve Litt, architectural critic for the Cleveland Plain Dealer that considered the impact of Uptown District. I took part in the panel along with LaTisha James, senior director, Local Government & Community Relations for Case Western; Lilian Kuri, program director for Architecture, Urban Design and Sustainability at the Cleveland Foundation; and Chris Ronayne, president of University Circle, Inc. Kuri highlighted the importance of the Foundation’s “whole district approach to investments” in design and planning to support community development, and Litt observed that Uptown demonstrates that “early money can leverage good design.” The venue’s $10,000 RBA cash award will support community programming and events that bring people together in Uptown.

Next, Simeon Bruner and I flew to South Carolina where the City of Greenville leveraged its RBA recognition to frame a conversation about the city’s future. On October 16th, we presented the award plaque and certificates at a sun-drenched ceremony in the center of Pedrick’s Garden, the latest addition to Falls Park. Mayor Knox White, recently awarded Honorary Membership in the American Society of Landscape Architects (ASLA), acknowledged the vision, public-private partnerships, and collaboration within the community that made it possible.

Later, Simeon and I participated in a forum and panel discussion at the South Carolina Governor’s School for the Arts and Humanities that considered how design can spur inclusive, sustainable, and environmentally responsible growth in places like Greenville. Organized by the City of Greenville and moderated by Dana Souza, director of Parks, Recreation and Sustainability, it tapped into the wisdom and experience of local, regional, and national practitioners to inform Greenville’s efforts to address urban challenges like community engagement and equity, congestion and density, and public infrastructure. The panel included Tim Keane, commissioner of the Department of Planning and Community Development for Atlanta; Mary Padua, founding chair and professor at Clemson University’s Department of Landscape Architecture at the College of Architecture; Ginny Stroud, community development administrator for the City of Greenville’s Community Development Division; Richard Webel, president and member of the board of directors of Pacolet Milliken; Brad Wyche, founder and former executive director of Upstate Forever; Simeon, and me. According to Souza, the forum succeeded in starting “the discussion on the changing American city and how good design choices made in response to our growing community will create a healthy and livable Greenville for future generations.” The City of Greenville will use the $10,000 RBA cash award to continue the conversation with a design symposium.

Now that we’ve wrapped up the award ceremonies, we’re in the process of preparing detailed case studies about the five 2015 winners that will be published in a book and online. We’ll also be on the road presenting at regional and national forums in Arizona, Louisiana, and New York. Stay tuned for reports from our travel and conversations with fellow design and development practitioners.